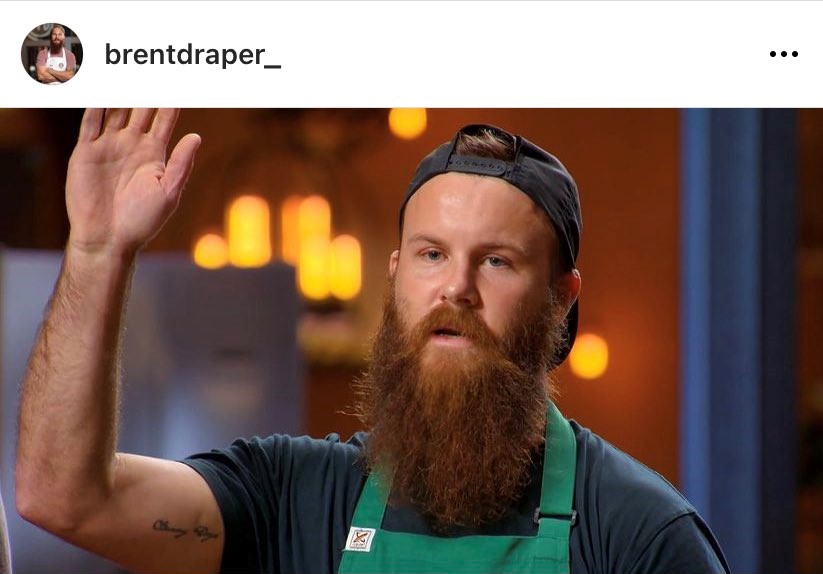 I’m a big Masterchef fan. I love food, I love stories, I love Melissa Leong’s choice in BIG earrings – what isn’t there to love?!

So it was with some trepidation that I approached the last 15 minutes of tonight’s episode. Channel 10 had been promoting an emotional farewell all weekend. It was apparent that there wasn’t enough time in the episode left for the planned second elimination cook. All signs were pointing to Brent opting to leave early. The editors had been leaving breadcrumbs all episode (though in characteristic Masterchef editing style, I think we can call them loaves).

I was apprehensive. TV, particularly reality TV, has not been historically great at telling accurate, empathetic stories of people experiencing mental health issues. It was only a week or so ago that we saw the sporting world pile on Naomi Osaka for making exactly the same decision Brent made this evening.

And my initial response to the way the story was told was one of gratitude. While I’ve never barbecued a chicken on national television, I’ve been where Brent was. For the last couple of episodes, I’ve recognised the tired eyes, the glazed look, and the inability to absorb feedback, even when it’s overwhelmingly positive.

While I’m confident in the knowledge that many of the choices I’ve made over the years have saved my life, sometimes I can’t help but feel sad for the things I’ve given up when my mind was telling me that to continue would be overwhelming.

So to see Jock consoling Brent, and to hear Melissa tell the self-confessed ‘tradie with fat fingers’ that it was OK to put his happiness first, I felt happy we were seeing a new mental health narrative for blokey blokes.

But the more I’ve sat with this (and admittedly that’s only an hour), the more it’s rankled. We all know this is reality TV, and we all know it was edited to be like this, so I think it’s important to examine some of the choices that led to Sunday’s episode.

The producers knew this was coming, but opted to trail tonight’s exit as a ‘shock twist’. They exploited Brent’s own feelings in the moment, and our feelings as viewers, for ratings.

They built up Brent as ‘just a boilermaker’. I now look back on this cynically and feel like those earlier choices have set us up for this evening. With producers encouraging Brent’s talking heads to focus on him being a fish out of water, and reflect on his family, it’s hard not to think this contributed to imposter syndrome and homesickness. Editors including those snippets for a pay-off, when his shock departure challenged our assumptions about the stoic manly man.

They sowed the seeds of Brent’s struggles in earlier episodes. A cursory look at Wednesday’s #MasterchefAU showed several Twitter regulars expressing concern about Brent’s listlessness. But we were never shown if he received any support. The Lifeline number flashed up after tonight’s episode alone. This plays into an ongoing narrative of mental distress escalating into a crescendo, an all or nothing decision to stay or leave.

A genuinely stigma changing narrative? Recognising that someone is struggling, and giving them the help to stay engaged. As viewers, we have no idea if Brent received any other support than a brief, emotionally charged chat with Jock. Who am I to predict the ups and downs of the Masterchef kitchen, but I doubt that a Brent on his game would have left in tonight’s elimination cook.

This was a production and an editing choice.

And its also one that we should recognise, as viewers, we are complicit in. We watch the show for the drama, the flops and the redemption arcs. We know that the competition brings people to the point of collapse and tears. Maja’s panna cotta was used on a Bupa ad tonight for health insurance to deal with life’s mistakes! It’s a story that sells. And we complain when it’s boring. So it’s partly our fault when situations escalate to a point of crisis. When it’s our desperation for edgy, manufactured drama that got us here, what’s our duty of care as viewers?

In saying all this, I have nothing but the utmost respect for Brent. The reaction from viewers on Twitter has been positive, and Brent’s own Instagram post suggests he is happy with the decision he has made.

But it bothers me that once again, the templates we are using for stigma reduction rely on the people doing it hardest to be their most vulnerable on the national stage. It’s hard not to cry when you see Brent’s genuine emotion at making one of the toughest decisions of his life. And it’s even harder when that’s intentionally set to music designed to elicit that reaction.

Note (added after publication) – I don’t doubt that the Masterchef production team included access to mental health supports. Access to mental health support is great and should be available in every workplace, especially those with the stressors of Masterchef. My intent is less to focus on the individual circumstances of Brent’s experience, and more what these circumstances say about the structural aspects of stigma reduction.