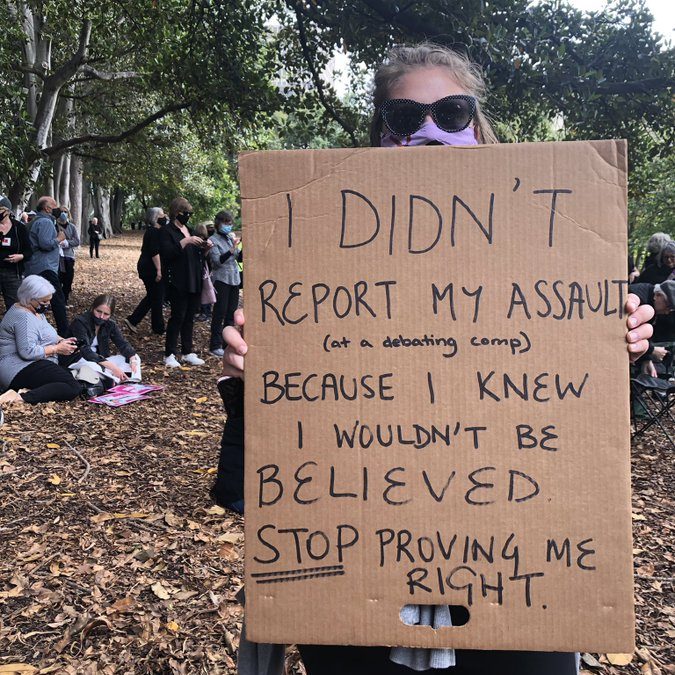 I had intended that my next piece of writing be from my long list of ideas, about suicidal ideation or about the Royal Commission report. Alas, the last few weeks have compelled me to write something else.

I have been sexually assaulted at least twice in my life. Once as a student, following a debating competition, which I’ve written about before. Another time, I hadn’t even been able to put words to until two weeks ago, memories of a workplace sexual assault resurfaced by the never-ending media cycle. I’ve been processing it in my journal – a mess of half-sentences, images and colours that I now know would be used to render me mad if they were ever published. These two experiences have been front of mind for me, eerily echoing the stories every woman in Australia now knows.

Two sexual assaults. It seems like a lot. It doesn’t even cover the years of street harassment. The fear of being locked in a taxi or uber with a driver who seems a little too interested in your love life. The man who masturbated in the street at my mum and I when I was 14. The time a ‘friend’ crawled into my bed when I needed a place to crash. The times a man took advantage of when I’d had too much to drink and conversations about consent would have been inconvenient. The years of emotional abuse in a relationship that broke me down and coerced me into things I knew at the time made me utterly miserable. Gendered violence is a reality of my life, and every woman I have ever met.

So you might expect me to be writing about trauma. I’m not, though I know about trauma. I know the sudden claustrophobia, the narrowing in of the world that takes me back to being a scared child. I’m lucky in that the gendered violence I have experienced has not caused me trauma.

But it has caused me rage.

It’s a rage that burns ever-present. I rage at a country that shrugs when we have three Aboriginal deaths in custody in a week, 30 years after a Royal Commission told us everything we need to do to make them stop. I rage at politicans who keep children locked in offshore cages. I rage at a government that proves it knows how to eliminate poverty but cuts back welfare supports anyway. I rage at a world that looks at a man like Mathias Cormann, with a history of inaction on climate change, and thinks ‘yep, that’s the man to lead us through this’.

I rage because the easiest goal for politicians in history is protecting a young, intelligent, white, politically-allied woman from rape in their own workplace and they can’t even be bothered to do anything about that.

I didn’t report my sexual assaults because I didn’t think I would be believed. I didn’t think that reporting crimes perpetrated against me would lead to any kind of justice. The most powerful people in the country are proving me right.

And it’s that injustice that grinds you down. Injustice turns itself into a burning anger that, with nowhere to go, just burns its host up instead.