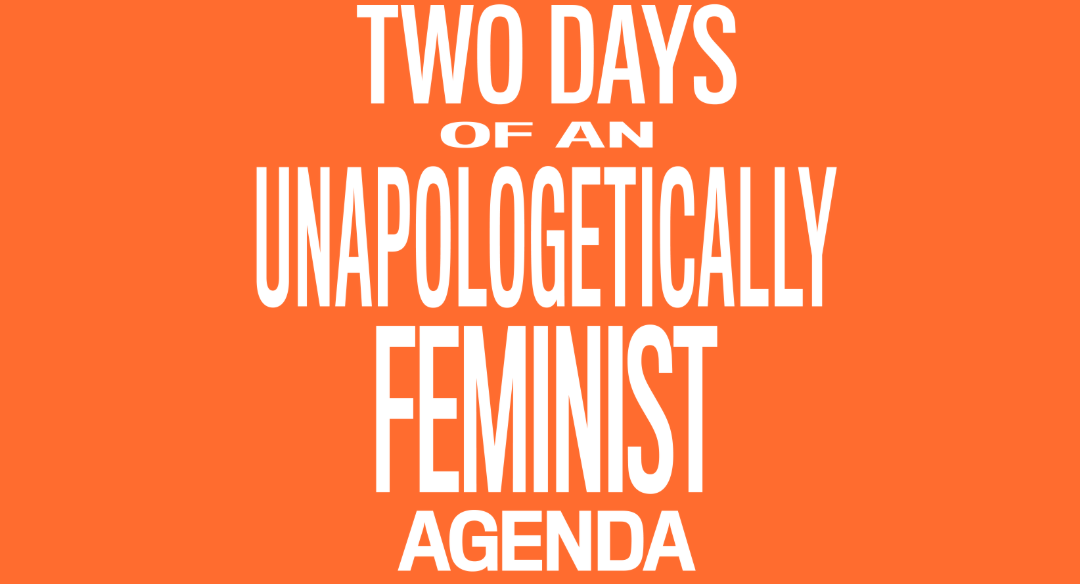 This weekend was the Wheeler Centre’s first Broadside, an “unapologetically feminist” festival of ideas. Of course that’s my jam, so I bought a ticket as soon as it was released. And oh my god, I was blown away by the weekend.

I don’t think I’ve ever been to a public event that has so genuinely changed the way I think. Incredibly intelligent women and non-binary people were given the space and time to explore challenging ideas in the depth they deserve.

I am probably going to be reflecting on the festival for years to come and I don’t want to immediately spit out some blah written thing that tries to neatly encapsulate all the things I thought over the weekend. For one, I think that would be intellectually dishonest because one of the things I really took away from the weekend was to reflect on my own feminism. I’ve always known my feminism comes from a position of privilege (on multiple dimensions, not least my race, education and socio-economic status) but I think I need to take stock of what that means for me as someone who is more than a feminist, someone who does feminism.

Firstly, when the Wheeler Centre releases the content, I encourage you to consume it voraciously. For what it’s worth, my favourite sessions were the panel on decolonising feminism (though I’m reluctant to call it that as both concepts were challenged in a mind-meltingly sophisticated discussion); Jia Tolentino interviewing Zadie Smith; Sisonke Msimang in conversation with Fatima Bhutto and Mona Eltahawy; Aminatou Sow and Tressie McMillan Cottam; and, the panel line-up of my dreams on feminism and capitalism. So yeah…pretty much all the sessions. The ones I didn’t mention were also incredible.

Secondly, instead of trying to summarise my overarching thoughts, I’m pretty much just going to recreate the notes I took over the last two days. Sadly, I decided to watch an episode of Law & Order on the way into the city yesterday morning thus draining my battery and ability to take notes yesterday (I am a bad feminist who enjoys entertainment that profits from the sexual exploitation of women – imagined or otherwise). Decolonising feminism was lost to my dying battery which is sad because Aileen Moreton-Robinson shook me to my core. So most of my notes are from today.

Additionally, I had many thoughts during Monica Lewinsky’s interview this evening, but in keeping with her wishes, I’m not going to write about them because lord knows that women has had enough of people telling her story through their lens.

A lot of the things I’ve written below are direct quotes of the authors, but often them quoting others or are paraphrases of what they said. My notes were not good enough for me to pull that apart now. Soz.

Helen Garner
Writers are lonely, anxious rearrangers of things
Finding feminism was like I’d been under water and could finally take a breath. I’m an intelligent woman who’se lived 77 years in this world – of course, I’m a feminist.

Nayuka Gorrie
Self care has been coopted by capitalism so the people who need it most have the least access to it. Funnel the energy we use talking about self care into tearing down the system that requires people to need it.

Fatima Bhutto
Fearlessness doesn’t exist. You are brave because you continue.
I wasn’t raised to be a child or raised to be a girl. I was raised to speak my mind.
What is the value of polite if you are trying to survive?
The role of writers is to celebrate resistance, not to celebrate power.
I don’t get excited that a woman actress gets the same as her male co-star; that doesn’t make you a feminist, that makes you a capitalist.
It shouldn’t be feminism unless it’s suspcicious of power.

Mona Eltahawy
Sequins are my way of saying fuck the patriarchy.
I don’t wake up fearless. I wake up in the morning with anger. I demand justice and I demand to be free.
It doesn’t matter how nice you are, how much you smile; the fuckers always get you.
Fuck your crumbs. I don’t want your crumbs. I don’t even want your cake. I want my own fucking cake.
Patriarchy isn’t about men. It’s about male dominance. We aren’t just fighting for ourself but to break down systems of power and oppression.
Radical rudeness
Practice feminism in 3D: defy, disobey and disrupt.

Sisonke Msimang
You attach yourself to the bits of power you’re proximate to, and that blinds you to the powerlessness of others.
Nothing and no-one is invisible, it’s just that we’re not looking at them.
When Scott Morrison says he speaks for the quiet Australian, we insist we will be loud.

Tressie McMillan Cottam
I have a deep well of belonging. I believe I belong in these spaces.
I speak too plainly to be literary. I am too black and too country to be urban or urbane. I am a product of black colleges, not white elite institutions. I absolutely believe that is a problem of the world, not a problem of myself.
There is a way to give your work to the world, to do the work you have a purpose to do without cleaving off the bits of yourself that the world does not want.
It seems like a blinding insight. But the reality of coming to know, and to know yourself, is a slow, painful one. One day you realise “oh I do that.” And I do that better than anyone.
Sitting in self-doubt and choosing to do it anyway.
No-one cared about the impact of my beauty on the world, like black women have less access to education or health. They cared about the naming of it. In pointing out my vulnerability, I was pointing out there’s. And I was violating the gender construct.
Freedom doesn’t feel good to everybody. Freedom to some people is uncertainty and that is terrifying.
It wasn’t meant to be likeable. Sometimes the truth isn’t likeable.
Am I going to become an academic or am I going to be sane?
Part of the challenge of becoming an academic was in taking on white patriarchial knowledge and anything else to that was parenthetical, I would have to explain. Why did I have to be parenthetical?
Everyone has a trauma. Some look more violent than others, but everyone has a trauma. What people think they can pull out of you in exchange for your trauma is something I have to push back on.
There are no incentives in this world to give a woman a voice.
It’s always clear to me when I travel that black is at the bottom. My interest is who is a the bottom with me.
Artists shine in political nastiness.
Is feminism about equality or justice? We talk about income, but not income inequality, not wage or poverty.
There is a sense that if you discipline yourself enough, you can get individual parity with a man. But the problem is, that’s competition, not feminism. As long as women of colour are cleaning your bathrooms, it doesn’t matter how much you lean in. A narrow focus on wages allows women to focus on narrow activities to achieve feminism while perpetrating things against other women.
Feminism is a system where I can have absolutely no economic value but can have human value. That is a discourse that has no purchase when we narrow to a feminism that talks about achieving through our existing systems. It’s nominal solidarity without actual solidarity.
How quickly tools of resistance can be weaponised – says a lot about how powerful and vulnerable ideas become.
Capitalism extracts the brand from the work and sells it back to you.
It’s hard to make good choices all the time. I don’t know how feminist it is to die because Amazon hasn’t brought you your groceries.
It’s scary to imagine that we don’t know any other way that to reproduce the system that’s trying to kill us. A consumption society cannot be an equal society.
Cooperative community building is already happening – marginalised populations often do it out of necessity. Leaving an abuser is as much about care as it is about money.

Aminatou Sow
Academia feels like a pyramid scheme.
There is nothing I can do to make myself more beautiful in this white heteropatriarchy. But there is freedom in that.
Are you a feminist or do you do feminism?
It’s about inviting other people to the table, not just improving conditions for you.
It’s not accident that it’s people like us who are asked to answer these questions. We have less choice than those who have designed the system.
The feminism that is racist doesn’t have the imagination to get free of capitalism. The feminism that is ableist doesn’t either.

Nicole Kalms
We need to stop thinking of cities as material artefacts. They are places of thinking, of technology, of law.

Jia Tolentino
There is such a sense of scarcity in the world. But we don’t actually live in a time of scarcity. There is more wealth in the world than there has ever been.